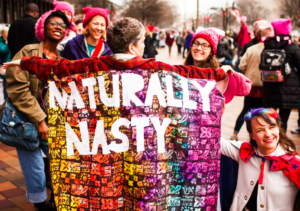 Troubles with anti-semitism among the leaders of the Women’s March? What’s the deal, the skinny, the EVIDENCE?

This Vox article details the allegations and the implications of the brouhaha. It describes the strategic inclusion of women of color at the outset of the march, other groups that struggled with inclusion (such as anti-abortion ladies and sex workers) and the umbrella of “intersectionality” under which the organizers strived to find, and weaponize, common ground to confront Trump with his misogyny.

Farrakahn described how Jews had done a lot of wacky stuff, including my favorite “engineered marijuana to make black men gay.”

Linda Sarsour (Palestinian-American) joined around the same time as Tamika Mallory. Both support Louis Farrakhan. At the Nation of Islam Saviour’s Day event in February 2018 Farrakahn described how Jews had done a lot of wacky stuff, including my favorite “engineered marijuana to make black men gay.” Mallory was in attendance and got a shout-out from Farrakhan.

Anti-semitic comments have been attributed to Sarsour and Mallory. As to actual evidence, as with charges of sexual harassment, there is no audio record. It’s a she-said/she-said situation.

Vanessa Wruble, one of the leaders who emphasized the importance of allying with women of color for the march, decided to leave after meetings in November 2016 and January 2017. She states “I personally witnessed statements that were inaccurate about the role that Jews have played in the slave trade and in the prison industrial complex.” The communications director present at those two meetings says that Wruble is lying. Evie Harmon claims that she witnessed the Wruble being attacked for being Jewish and that “her biggest regret” is failing to support her.

Wruble left to head another group called March On which is focussed on winning elections in Red states. Here’s the Facebook page for their Massachusetts group.