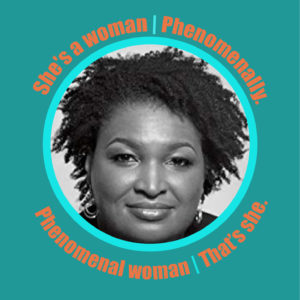 Troubles with anti-semitism among the leaders of the Women’s March? What’s the deal, the skinny, the EVIDENCE?

This Vox article details the allegations and the implications of the brouhaha. It describes the strategic inclusion of women of color at the outset of the march, other groups that struggled with inclusion (such as anti-abortion ladies and sex workers) and the umbrella of “intersectionality” under which the organizers strived to find, and weaponize, common ground to confront Trump with his misogyny.

Farrakahn described how Jews had done a lot of wacky stuff, including my favorite “engineered marijuana to make black men gay.”

Linda Sarsour (Palestinian-American) joined around the same time as Tamika Mallory. Both support Louis Farrakhan. At the Nation of Islam Saviour’s Day event in February 2018 Farrakahn described how Jews had done a lot of wacky stuff, including my favorite “engineered marijuana to make black men gay.” Mallory was in attendance and got a shout-out from Farrakhan.

Anti-semitic comments have been attributed to Sarsour and Mallory. As to actual evidence, as with charges of sexual harassment, there is no audio record. It’s a she-said/she-said situation.

Vanessa Wruble, one of the leaders who emphasized the importance of allying with women of color for the march, decided to leave after meetings in November 2016 and January 2017. She states “I personally witnessed statements that were inaccurate about the role that Jews have played in the slave trade and in the prison industrial complex.” The communications director present at those two meetings says that Wruble is lying. Evie Harmon claims that she witnessed the Wruble being attacked for being Jewish and that “her biggest regret” is failing to support her.

Wruble left to head another group called March On which is focussed on winning elections in Red states. Here’s the Facebook page for their Massachusetts group.

These hearings are feeling urgently personal for so many of us, regardless of whether we have been sexually assaulted. For me it calls up situations in which I have felt victimized and made wrong due to an underlying power dynamic that trumped the truth.

Some people easily manipulate consensus and consistently put forth a version of events that plays to their advantage. Others are ill-equipped to garner support in the face of bullying and lies. I’ve seen bullies who cannot tolerate looking at their own ugly behaviors project that ugliness onto their victims by riling them up. Strident reactive posturing replaces a careful examination of the facts.

Strange as it may seem, I feel compassion for Judge Kavanaugh. He’s publicly facing horrible humiliating allegations. How would I fare in a comparable situation? How does it feel to be confronted with your hideous shadow side in the public square? No one is great at looking at their flaws in private. Flooding feelings of shame, guilt, anger and sadness do not create a hospitable environment for detached self-inquiry.

This is what I think: Blasey Ford’s testimony was credible and Kavanaugh’s was not. This does not mean the assault has been proven without a shadow of doubt.

What has been shown, for the millionth time, is that members from both sides of the aisle put politics before ethics. Both sides used a heart-wrenching investigation as an opportunity for bluster, attacks, deflections and playing to the worst in the electorate.

According to his classmates, Kavanaugh has lied about facts peripheral to the case. In the course of engaging in emotionally charged partisan posturing, a Supreme Court nominee and actual judge has revealed the same damning character flaw he uncovered in Bill Clinton in the Whitewater investigation. I number among those who feel that this display of bias, emotionality and lies disqualifies him for a spot on any bench. Karma is a bitch.

In contrast, Blasey Ford’s credibility shone. She went out of her way to process each facet of every query in a meticulous, and, for me, disturbingly apologetic, manner.

Ford’s ability to clearly recall a profoundly traumatic event points to many therapy hours spent examining her memories. Blasey Ford spoke like a professional anchored firmly in her wheelhouse. In a child-like tone of voice she used her knowledge of neuroscience to explain why her memories are reliable. Her testimony was “pleasing”: grounded, logical, openly vulnerable and respectful of the interview process.

After hearing profoundly disconcerting, deeply contrasting accounts from Ford and Kavanaugh, the body politic was treated to Republican pols pretending it makes sense to simultaneously express sympathy for Blasey Ford and dismiss her capacity to parse reality. She’s just so darn pleasing. I don’t want to attack her outright. That would be unkind. So instead I’ll imply that she mistakenly identified Brett Kavanaugh despite her best intentions. She must have been so rattled by some other mysterious man that she’s incapable of recalling the facts. Also, the poor innocent doesn’t realize that she’s being used by the Democrats. She’s so well-spoken and polite. Poor gal is just too addled to distinguish between fact and fiction, between exercising civic responsibility and being used as a pawn. Democrats are evil!

As I continue to struggle to come to terms with what these events have brought up for me personally and politically, and as an exercise in reflection, I wrote the following statement in the voice of Judge Kavanaugh.

>>>
I was brought up in the bro culture where excessive drinking and degrading women were encouraged. Many popular movies of the 80s promoted these behaviors. There is plenty of evidence — from my high school yearbook, to the nickname of my college fraternity, to the recollections of my college friends — that I, along with my peers and educational administrators, participated in, or at least tacitly condoned, a culture that disparaged women as a means of bonding with my “brothers.”

Since that time cultural mores have shifted. Binge drinking is seen as problematic. “Locker room talk” is code for rationalizing disrespectful behavior toward women. Some parents teach their male children to be responsible for refraining from behaviors that could result in hurting those around them — that if they witness violence against women it is incumbent upon them to intervene. Many educational environments prescribe zero tolerance for the “boys will be boys/ it’s a man’s world” ethos of the 80s.

I can say in all honesty that I have never regarded myself as someone who consciously disrespected women. Also, I have no recollection of the events described by Dr. Ford. As a man of the law, a judge and a human being I must now ask myself if I have made every effort to determine the truth of these startling allegations.

While I am not a psychologist by profession, I am aware that memories alter to protect us from feelings of shame. It is possible that during my heavy partying days I engaged in reprehensible behavior that I am unable to recall. More simply, the amount of alcohol I consumed may have obstructed recollection. It is my responsibility to face up to this awful possibility and to encourage all of my friends from that time, including Mark Judge, that if they have any knowledge of the alleged event the time has come for forthright disclosure.

It has been said that within crisis lies opportunity. Under these fraught circumstances I have the unique opportunity to direct my energies to getting to the truth of events that took place 36 years ago. Little in my past has prepared me to face the rigors of such an inquiry. And yet I realize that, fair or not, ready or not, time’s up. I can no longer, in good conscience, allow rationalization, obfuscation and partisan fatigue muddy the investigational waters. In the midst of almost unendurable emotional strain it is incumbent upon me to be a stand for character over privilege.

Either I act emotionally and from a sense of entitlement or I choose mature, deliberate investigation. The latter may contain information that is completely overwhelming for me to contemplate. And if I choose the former, I am a lesser man who is betraying the values of my profession and my faith.

I choose the latter.